At Seeds for the Sol, we are clear that addressing climate change is crucial for Oregon’s future. The Clean Energy Jobs Bill (HB 2020A) can help that happen. In solidarity with a strong coalition across the state, we are supporting that legislation.

HB 2020A addresses three needs that are critical for our future: a strong clean energy economy that caps and permanently reduces greenhouse gas emissions, natural and working lands sequestering CO2, and climate resiliency across the state. If you want to learn more, you can start here.

We need your help now!

FIND YOUR STATE SENATOR AND REPRESENTATIVE:
Use this link to find your state senator’s and state representative’s contact info

KEY TALKING POINTS WHEN CALLING YOUR LEGISLATOR
Ask them to fund and pass HB 2020A, the Clean Energy Jobs bill, because:

EXAMPLE EMAIL YOU CAN SEND TO YOUR LEGISLATOR

Dear [insert Legislator name],
Please fund and pass HB 2020A, the Clean Energy Jobs bill. The bill will make Oregon a leader in our country, and we need leaders to show us how to make an equitable and just transition to a clean energy economy. The bill has is supported by a broad coalition of Oregonians representing many segments of the state, including environmental, equity, public health, business, rural, tribal, and labor union interests. It will help lead us to our greenhouse gas goals. Every day, more citizens are realizing there is no issue as important as addressing our planet’s climate crisis. It’s time to ACT. 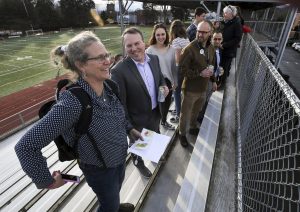 As Corvallis School District Superintendent Ryan Noss finished speaking at a Wednesday afternoon ceremony celebrating the installation of a new rooftop solar array at Corvallis High School, he remarked that the weather would be nice enough for attendees to go outside and look at the array.

“Mother Nature is on our side,” he said.

“‘Mother Nature is on our side.’ That should be on a bumper sticker,” said Julie Williams, a CHS teacher and adviser for the school’s Green Club, following Noss’ comment. She added that the world would be in better shape if more people realized that and tried to act on it through things like building more solar arrays.

At the event, billed as a “Solarbration,” Williams said her students in the Green Club had been working to have the 117-kilowatt array installed since 2007. “12 years too long,” she said.

Students in the Green Club helped raise some of the nearly $266,000 cost of installation. Other funds for the array came from the Energy Trust of Oregon, the Oregon Clean Power Cooperative and Benton Electric, Inc., which installed the array in September and owns the array.

Board of Commissioners Office
for Benton County

Julie Williams has been an advocate for community solar since 2001, and is the founder of Seeds for the Sol: Community Solar, Giving Power to the People.

Seeds for the Sol is a non-profit, grass-roots organization that makes it easier for low- and middle-income homeowners to afford solar systems. Seeds for the Sol help homeowners finance solar arrays using zero-interest loans, as well as tax incentives. Homeowners’ out-of-pocket cost are typically less than $2,200, plus a $150 processing fee. In addition, Seeds for the Sol provides homeowners with an experienced solar mentor, as well as contracts and a list of local installers.

Additionally, Williams is a teacher at Corvallis High School. Her concern for the impending climate crisis has motivated her to create and teach the course, “Sustainability and Society.”

Your carbon offset will put solar panels on schools and low income housing. 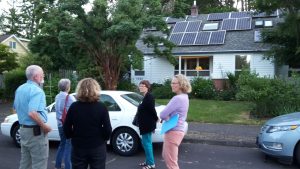 “You people are the guinea pigs,” said Annette Mills. “This is our first solar house party, and we’re going to keep having them monthly until we run out of hosts or everybody has solar on their roof.” Mills, facilitator of the Corvallis Sustainability Coalition and three other members of the coalition’s Harvest Sunshine team, held an informational event on solar power at the northwest Corvallis home of Charlie Miller and Martha Clemons.

More than 20 people participated Wednesday and heard presentations on financing and other issues. And the guests came loaded with questions. The basic model discussed was a 4.7 kilowatt system that costs $12,400. After rebates and tax incentives, the homeowner usually is out just $2,600 — and then reaps the future benefit of drastically reduced energy costs. Clemons, Mills and Julie Williams of the nonprofit Seeds for the Sol all noted that their electricity bill is essentially zero, with their only payment being the standard hookup fee.

“We generate more than we use,” Clemons said. “The power company keeps track, and we use in winter what we gain in the summer. Every time we generate 3KW per day we are banking electricity for later. I’m disappointed when I wake up and it’s foggy.” Miller noted that adding solar “helps you learn to cut back what you use. I’ve learned to keep my washing machine unplugged.” Mills added that it’s “also important to take other efficiency measures — insulation, LEDs and turning off lights.”

Party participants came from as far away as Albany and South Corvallis and the questions ranged widely, from the influence of trees, to insurance, reliability issues, how many panels should be used and which direction they should face. Tree cover can be tough to work around, said Cassandra Robertson, a member of the Harvest Sunshine team and co-owner of Abundant Solar. Robertson said that the tax credits require that an installation be at least 70 percent efficient.

Another challenge for solar is the politics of tax credits. The federal credit, which is worth about $3,000 per year, is set to run for another five years, but the $6,000 state tax credit sunsets at the end of this year unless the Oregon Legislature acts to continue it. Homeowners who install by Dec. 31 would get the full state tax credit even if legislators do not renew it, but those installing after Jan. 1 would be out of luck.

Harvest Sunshine is an initiative of the Corvallis Sustainability Coalition, which has a goal of doubling the amount of rooftop solar by the end of 2020. In year one, the project increased the solar electricity production to 4,643 megawatts, a 13 percent increase. The group hopes to get to 10MW by 2020. “This is a significant increase,” Mills said, “but we need to dramatically step up the pace of shifting to renewable energy in order to meet our goal and to combat climate change.”

Miller showed the participants the DC to AC inverter box just outside his back door, and everybody gathered in the street to look at the rooftop panels. The roof has a number of skylights that forced installers to be a bit creative with placement. Also, the roof faces east. A southern exposure is best for solar, but Clemons and Miller have had no trouble generating the juice that they need.

2017 is an important year for solar! We are working to increase the number of installations we finance each year. This year, we are striving to help 30 homeowners install solar on their roofs. See below what we’ve accomplished so far this year and learn how you can help:

So far, we have 10 Corvallis families lined up to get solar! Our goal for the year is to fund solar arrays for 30 families. Want to help us make that happen? You can either sign up yourself, or tell a friend about our program. Learn more here.

Pass-Through Partners make our program possible. We have 11 PTPs lined up so far, but we need 19 more! Click here to find out if you or someone you know can make $600 by helping a neighbor go solar!

Julie Williams, Seeds for the Sol by Amy Hunter on Vimeo.

Inspired by her Climate Reality training, Julie Williams created this innovative wealth-sharing program that provides zero interest loans to homeowners for solar installations. Using investments by “Sun Buddy’ donors who get paid back by tax credits and rebates; this is a community-based solution for ramping up clean energy solutions in Corvallis, OR. USA.
Kate Feldman

See an example of installations costs.

Inspired by her Climate Reality training, Julie Williams created this innovative wealth-sharing program that provides zero interest loans to homeowners for solar installations. Using investments by “Sun Buddy’ donors who get paid back by tax credits and rebates; this is a community-based solution for ramping up clean energy solutions in Corvallis, OR. USA seedsforthesol.org.

Julie Williams_Seeds for the Sol from Amy Hunter on Vimeo.

At the Celebrate Corvallis event Seeds for The Sol is nominated the winner of the Good Steward of the Planet Award of the year 2015. 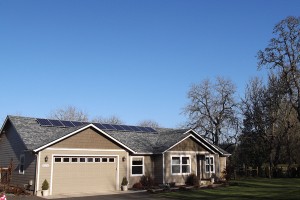 The Corvallis Sustainability Coalition announced a campaign to support solar panels installation on Corvallis’ roofs. We have till the end of this year to win the $5 Million of Georgetown University prize. More information: please read the GT article from January 5th, 2016.